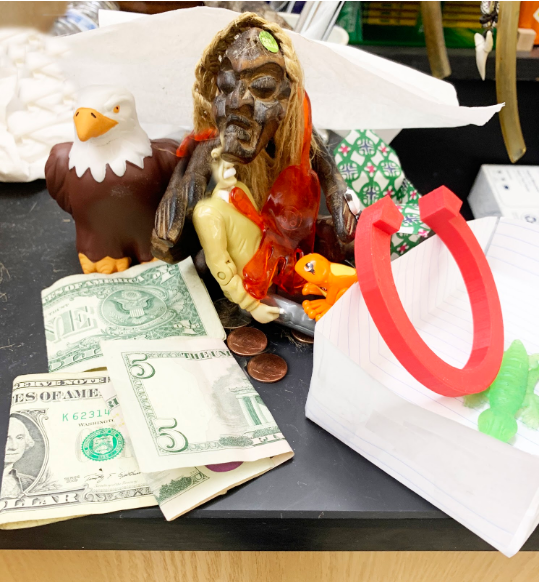 "Geoffrey" regally poses with his numerous offerings as the West High eagle looks on.

Comfortably housed in S-7, “Geoffrey” is believed to be the reason for students getting better test scores.

The small wooden doll sitting on Mr. Goudreau’s desk, has more power than meets the eye. According to believers, an offering to Geoffrey means that you will get a test score better than you could’ve achieved on your own. Surrounded by numerous offerings from students, ranging from sticks of gum to five dollar bills, Goudreau finds the relationship between students and Geoffrey transactional.

“When I saw someone providing an offering, a stick of gum or something else, they were hoping for direct assistance.” The transaction was, ‘I give you a stick of gum, and you give me help on the test.’… It was a business relationship,” says Goudreau.

A few students have weighed in on their beliefs. Claire Moreland, a current freshman, describes it as, “A ritual pre-test thing that kids like to follow.”

Moreland gave a stick of gum to Geoffrey during the last test. When asked if she believed that Geoffrey helped her on the test, she replied, “No, not really,” and rates her belief at a two out of ten. “He is just an object, but it’s fun to play along with the rest of the class.”

This is unlike freshman Ashley Kim, who replied, “Definitely” to the aforementioned question (as she tied with Moreland for the highest score on the last test), and rates her belief as a “solid 8.36”. Although she has not given any offerings to Geoffrey, she finds comfort in simply patting his head.

“I guess, in a way, Geoffrey makes me calm during the test, so my calm and collected mind can focus on the test and answer as best as possible,” Kim says.

Freshman Kian Flynn, however, makes sure to be generous to Geoffrey, giving coins and bills whenever there is an upcoming test.

“He does give me confidence, and I feel like that helps me do better on tests,” he says. Flynn rates his belief at an eight, and voiced disbelief at Moreland’s two.

This is not the first time Flynn has believed in a lucky object. He had a lucky horseshoe once, which he has also given to Geoffrey as an offering. Flynn also disagrees with Goudreau’s idea that the relationship is transactional.

With dollars upon dollars sitting in front of Geoffrey, another question raised is what happens to all of the offerings at the end of the year. It is, though, a common misbelief that Geoffrey will curse whomever steals from his offering pile. The curse is that they will get only Fs on their tests for the whole year. Moreland, Kim, and Flynn all agree on this curse as well, and would never dare to steal.

Which brings up another question: Is Geoffrey a religion at this point? Moreland, Kim, and Flynn all concur that yes, it is.

“Yes, it sort of fits under the definition,” says Flynn.

So when did this whole religion start? Only last year! Goudreau, however, does not recall where he got Geoffrey, and several sophomores do not remember it clearly, which leaves one last question: will this year’s freshmen stop their belief and forget Geoffrey with more time?

Moreland, Kim, and Flynn all say no; they will continue their belief.