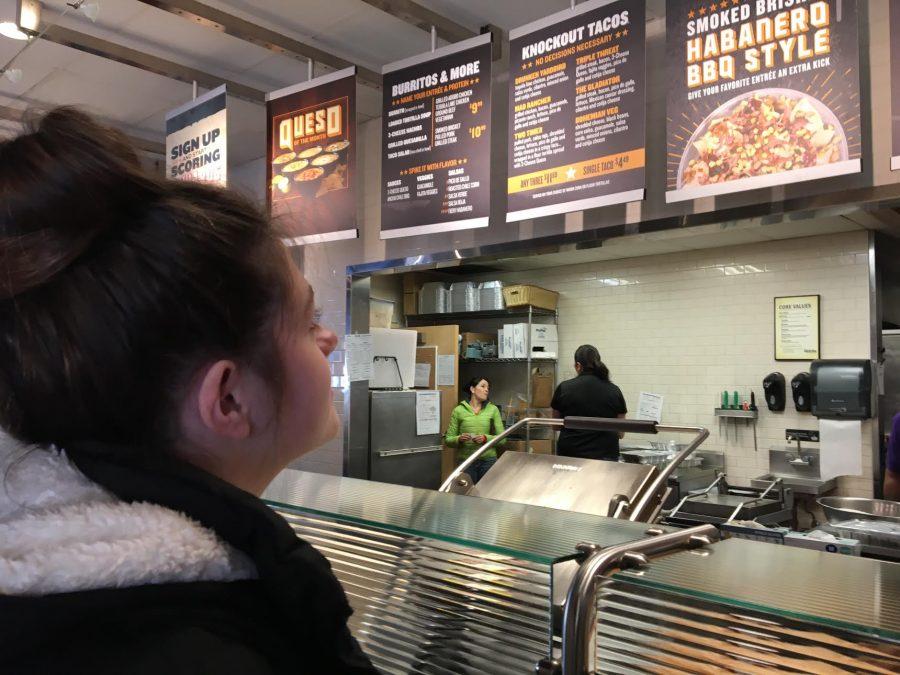 Dasia Tirapelli can hardly wait to order a burrito at Qdoba during her lunch break on Wednesday, Febuary 1st, 2017.

West Anchorage High School has an open-campus during lunch, and students have a wide array of options for eating lunch off school property. There are many options for students and staff to go to. These places include, Carrs, McDonald’s, Qdoba and Beartooth Theater Pub and Grill, just to name a few. A few of these places students are able to walk to, but most have to drive to their eatery of choice.

Geographically, West has an abundance of lunch spots, with over 20 places to chose from within a two mile radius.

One of the newest restaurants near West is Panda Express, which opened towards the end of November, 2016.  It is within walking distance, and is located in the Carrs parking lot just down the street from West. Dasia Tirapelli, a sophomore at West, says that the restaurant is one of her two favorite places off-campus lunch destinations.  She said, “[My favorite place to go out to lunch] used to be Carrs but since Panda Express, it kinda basically replaced it.” Tirapelli continued on to say that she can get similar food for a better price while still being able to walk there.

Tirapelli seems to be very passionate about New Sagaya, her second favorite place to go out to lunch, and really likes the atmosphere that it puts out. “I really like the whole aesthetic of New Sagaya and I like the crowd that it brings in from the school.” She said that she eats there very often, and continued on to say, “Their food is really good and authentic.”

“My favorite lunch spot is probably Fred Meyer, if you’re brave enough to drive that far” said Levi Davies, a junior at West. “It’s really tasty, they have the best fried chicken in town, it’s real cheap. Fred Meyer is where it’s at,” he said. Davies used to walk to Carrs during lunch as a freshman and sophomore, but now that he has a car, he prefers to make the long trek to Fred Meyer.

Davies compares the grocery store to it’s competitor, Carrs. “[Fred Meyer] is kind of like Carrs, but better and cheaper.” He talked more about how it can be a bit of a stretch to try to make it there and back to school during the 40 minute lunch period. But,

he can assure you that if you can do it, it’s worth it, and even if you are late back to school, the fried chicken makes the detention you will receive worth while.