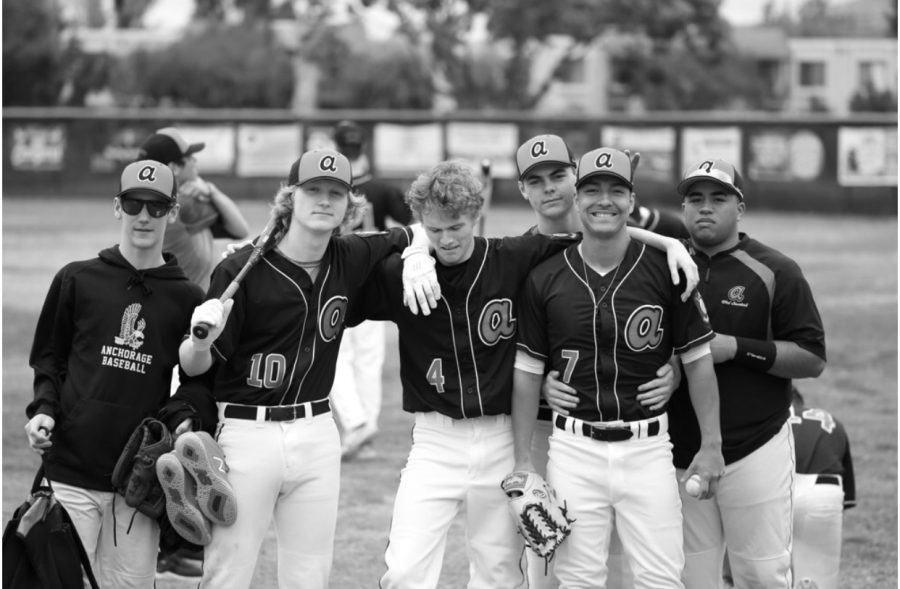 West Anchorage High school baseball is back and the team is preparing harder than ever. The senior leaders want this victory more than ever and coming so close last year only fuels the fires of competition for this season. After a 2018 post season loss to the South Anchorage Wolverines the Eagles have been itching to put their cleats on again.

“Losing some key seniors was a major hit to the team, but we’ll be able to bounce back with some of our returning juniors,” says Coach John Opinsky, when asked what would be hard about this season. On April 13 the team flew down to San Diego to play in a nationwide tournament. The team traveled with 13 players and four coaches all competing in an elimination tournament. This was West’s first live at bat all season, but this is a slight disadvantage for the West High Eagles because most of the teams are already well into their baseball season. With surprise springtime blizzards and radically fluctuating weather patterns, baseball in Alaska is a challenge to say the least. Although the level of play is much higher in these tournaments, West isn’t worried about how they stack up.

When Alexander Alverez was asked about the skill level of their team he said, “We are the best we have ever been and can go all the way this year.” West practices have been more vigorous than ever in preparation for this venture. When captain Jack Opinsky was asked about his view of the team he said, “we are all a big family and are better than we ever have been, even our practices have even improved up because of our unity.” Overall the team is very excited for their season and say “the best is yet to come, stay tuned,” says Jack.

Players involved in baseball have varying opinions on what positions require the most work or are the hardest. “I’m a catcher, which can be really stressful since people rely on me to call plays, stop wayward balls, and throw down people stealing bases,” says Luke Lagnas, a varsity catcher. Despite different opinions most players on the team agree that catching and pitching are the most stressful, in terms of reliance. Since they participate in the entirety of the game, they wear out the most and can make or break a game if they are off their game.

Last year the West varsity team managed to win more than half of their games. Overall, they went 8-6 in the season, placing 3rd in the state conference.

Despite having a rough start to the season this year, the team is confident that they will pull through for their next game.

With every passing day of practice the players are learning to sharpen their skills and techniques so that they can do even better at their upcoming games.

There are more games scheduled for the rest of the season until June that the players must work hard to prepare for. Each practice players start off by running laps around the track and stretching. Afterward they warm up their arms by throwing balls back and forth to one another at varying distances. Then, they warm up according to their positions with infield practicing grounders and plays and outfield practicing long distance plays.

They also practice batting in the cage and with live pitching by their pitchers. Towards the end of practice, they typically will have a scrimmage or a mock lineup in order to mimic the lay of a future games.

With a promising season ahead, the West High varsity baseball team continues to work hard each day and play every game to the best of their abilities.