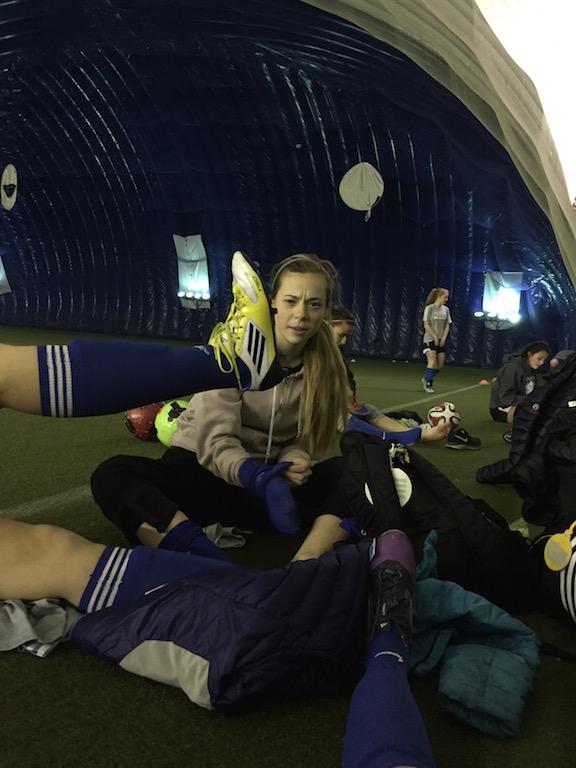 Rachel Fisher getting ready for her game.

Soccer is a sport that is starting to get more and more popular in the United States and even in Alaska. Wherever you are, there are so many different clubs and schools you can play soccer for. Playing soccer at these different organizations are actually a lot different than you think.

In Alaska, high school soccer and competitive soccer are two very different things. Rachel Fisher, a senior at East High School, plays competitive soccer for the Alaska Rush Soccer Club and has been playing on the varsity soccer team at East for three years. This year will be her fourth year. This sport is her passion and she plans to play in college next year and is ready to work really hard until then.

She hopes to be a star on her team in college, just like she is now on her competitive and high school teams. Rachel says, “Your comp team a lot of the time is closer and you do actual stuff if you’re trying to play in college, high school is just for high school.”

She enjoys playing competitive more because she had been on the same team for years and feels like they are a family, and they work really well together since they play all year around, whereas in high school you’re only playing for about three months. She says, “Competitive soccer here in Alaska is a lot more comfortable, therefore people get less competitive. High school soccer is a big show where people get to play against their peers and try harder a lot of the time.” With that being said, people feel more pressure to work harder during high school season because more of their peers come to those games instead competitive games and they tend to work harder on the field.

Another senior, Vanessa Velez, goes to South Anchorage High School and plays varsity soccer for South and competitive soccer for Cook Inlet Velocity Blue. Her competitive team is very good; they won a national championship in the summer of 2014. They are constantly traveling to play in tournaments around the country. Her high school team never travels.

“In comp soccer, you have the opportunity to travel and most of the players are all your same age and same skill level. High school you have a mix of many different ages and skill levels. You also represent your school, so there’s a lot more of a crowd watching,” she says. Vanessa prefers to play high school soccer because she has many friends on the team. Both her high school and comp team are outstanding. She says, “Even though my comp team travels a bunch and it’s a lot of fun, I have a very soft spot in my heart for my high school team. I love being able to play on the same team as my younger sister and play in front of a huge crowd.”

Carolyn Kinzie is a junior at Service High School and plays for the Alaska Rush Soccer Club as well as the varsity team for Service High. She really enjoys playing on her high school team because her competitive team is falling apart. Carolyn also likes to play more for fun instead of being so competitive since she does not plan to play college soccer. Carolyn says, “My competitive coach makes us run way more than my high school coach and I like working more on my technique better than I like to run.” She also really loves the feeling a bunch of pressure on the field during the high school games. “High school soccer makes me work a lot harder because I want to keep my starting position on the team and play in front of everyone. I love playing under pressure.”

The soccer organizations can be very different, but in the end, they both help each other out. Kids enjoy playing in all organizations and can truly find a passion in the sport with all the great teams we have here in Alaska.