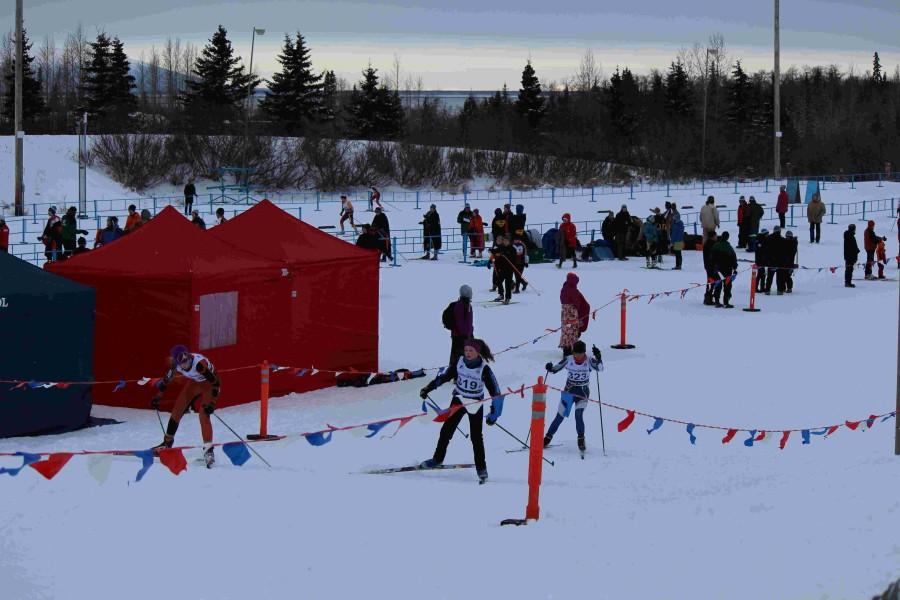 C-Team girls nearing the end of their race (front). Girls open lines up to go (middle). Racers coming in to to the finish (far)

All the schools in the district met to race against one another on Saturday January 24 for the Nordic skiathlon at Kincaid Park. The skiathlon is normally a 10k where skiers switch between classic and skate skiing halfway through. However it was changed to skate only race: four-lap 10k for boys, three-lap 7.5k for girls, and two-lap 5k for open skiers.

Relief struck the West High ski team on Thursday with the first significant snowfall in Anchorage since Christmas time. With the strong deficiency of snow, and above average temperatures nearly causing race cancellations, it’s clear that this has been one of the weirdest winters we’ve seen in Alaska in a long time. For the last three weeks, ski practice consisted of one 2k loop, saved from melting by the snowmaking machines at Kincaid.

Already two races have taken place on this loop: one four-lap classic race, and another two person, two-lap skate relay. The race that took place on the 24th happened to be the same loop… backwards.

One freshman on the team, Harold, said, “Skiing the same loop was a little boring, but that helped to know what you were up against.”

Blake said, “I happen to like the Kincaid loop so it was fun to ski it backwards.”

Now with a few surprising inches of fresh natural snow, not only are the trails better, but this opens up different courses to ski on in the final weeks. Strangely enough for January in Alaska, this has been the coldest race yet at nearly 0 degrees for the first time this winter. January temperatures normally average at 0 to -5 degrees F, and in the past ski races have been cancelled or postponed due to the cold.

“It was freezing!” Blake said, “It definitely made the race more uncomfortable because waiting around for your start time was horrible!”

This normally wouldn’t be an issue, except that some skiers, particularly male skiers, haven’t quite learned the importance of a thing called “wind briefs.” Without pointing out specific people, there were definitely incidences of frozen ‘lower’ parts due to the longer distance and breezy conditions of the race. At the end of the day if you’re male, skiing in spandex, and its windy with 0 degree temperatures WEAR WIND BRIEFS!

First place results for the main teams are as follows (in order of team, school name, time)

Three more races in the season to go! Wish our team luck as they finish off the season strong!