Poetry Out Loud: Words of Inspiration 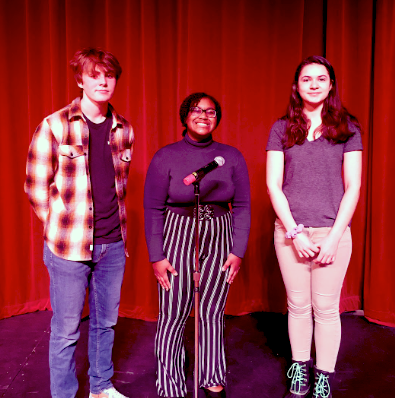 Everybody has fear of something; spiders, heights, the dark, but for many, public speaking is right at the top of that list. But that’s not the case at all for the West High students participating in Poetry Out Loud (POL). For them, this is a great opportunity to express their passion and creativity for poetry through their words and a golden opportunity to win a cash prize.

The competition begins in the English classroom, with students reciting a poem published on the web site to their classmates. They must not only memorize the poem, but must recite with well-rehearsed dramatic appropriateness, vocal intonation and physical presence. Teachers then pick the best recitations for the school-wide competition, which was held on January 22nd. From that round of 47 competitors, the top 10 met again to compete on January 29th. From that talented pool, two students were sent to the district-wide competition, with an alternate. The West winners were junior Asya Gipson, senior Cam Brosnahan and alternate Victoria Rossoff.

Gipson has participated in POL for three years and was the alternate for the 2018 competition her freshman year. She has also performed in West theater and community slam poetry competitions. “I think Poetry Out Loud is super important because we get to show both students and staff the importance of poetry and the value that it has. I think it’s a great opportunity to show people that you don’t have to perform poetry the same way in order to understand it,” she says.

Despite her winning recitation of “Life Cycle of Common Man” by Howard Nemerov, she does feel pressure when performing, particularly the memorization. “Memorization can sometimes be tough, especially if you want to do a longer poem, but other than that I enjoy poetry so there’s nothing particularly stressful about it,” she said. As to how she calms herself when she’s on stage, she says she does not look directly at the audience. “That’s the only way where I don’t freak out or mess up; I can’t look at someone in the eye,” Gipson replied. Gipson believes that immersing oneself in poetry expanding one’s knowledge of different poetry and poets is beneficial. She looks forward to hearing more poems at the district-wide contest.

Rachel Kittoe has been an English teacher at West since 2009, and she is the school-wide coordinator for POL. “I think POL inspires more love for poetry. I like that students get to choose the poem that they recite and I think they get exposed to a lot of writers that they don’t necessarily get exposed to in their English classes. There’s thousands of poets on there and they’re historical, but there also a lot of modern poets. I find students who find poems that speak to them and its really cool, they develop a bigger love for poetry,” she says.

Tatiana Watkins-Snow is a sophomore who made it to the final round at West with her poem “Apollo” by Elizabeth Alexander. Her poem was about racism and the moon-landing. “I think it’s important to really get people involved with different types of art; there are art classes at school like poetry and painting, but there are so many different types of art that aren’t taken it to account I think and poetry is one of those things and getting people involved in that is important,” Watkins-Snow says.

Poetry recitation has helped Watkins-Snow with her memorization and public speaking skills, and she stresses the importance of truly understating your poem above all else.  “If you misunderstand [the poem] and recite it, you won’t really interpret it the right way…you can’t be happy if the poem is sad,” she says. She has learned that poetry is not just about the words, but the interaction with the audience and the person reciting the poem.

Kittoe says students can learn recitation skills and have a boost in confidence through the POL recitation. “It’s almost like acting, how acting can help someone who’s quite shy to come out of their shell a little because they’re not themselves when they’re up there. I think poetry can kind of do the same thing for students in some ways. It can make them explore sides of themselves that they hadn’t before.”

Nearly 4 million students participate in the contest nation-wide, and at West hundreds of students recite poems in the classroom. West boasts three former students who have gone to Washington D.C. for the national competition, and one national winner from 2015, Maeva Ordaz, who met Michelle Obama and won a $20,000 scholarship as her prize.