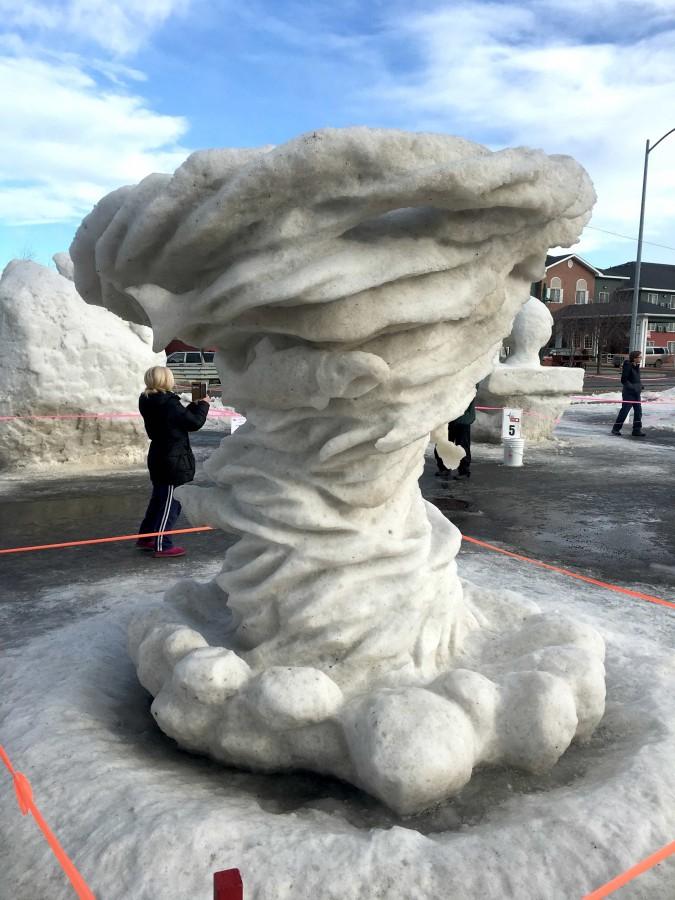 One of the most interesting Fur Rondy events is the Snow Sculpture competition, which occurs at Ship Creek.  The event draws many visitors every year, who come to see the intricate carvings and designs of many different works of art. There were snow monsters, elephants, snow machiners, polar bear, castles, and the winner a salmonado, carved by Wade Pier and his fellow teammates, Matt Lloyd and Jesse Mallor of AK Awesome.

This year was Pier’s 7th year competing in Division 1, which is the highest division and is made up of three man teams.  Sculpting is a hobby of his, however he is a carpenter by trade.  One of his teammates is a plumber/pipefitter and the other is a graphic designer.  Pier hoped to win this year and he did, like his has the past three years in a row, and travel yet again to Lake Geneva, Wisconsin where the national championship is held. This win was AK Awesome’s fourth in a row and fifth overall since they started competing in 2009.  Inspiration for the snow sculpture came from, “Being an imaginary child…no it’s actually a pun on sharknado,” said Pier.

Lorraine Wyles, a snow sculpture judge of nine years claims “I have been doing this for years and this is the warmest I have seen it.”  Wyles a judge for the snow sculptures by hobby but is a professional artist by trade, as a graphic designer in Anchorage.  One of the requirements to be a judge is to be a professional artist.   The position is voluntary with no monetary compensation.

The sculptures are judged on creativity, detail, degree of difficulty, visual communication and craftsmanship.  Wyles said that the most interesting sculpture she had seen so far was the salmonado sculpture by AK Awesome.

Among the attendees were the Fur Rondy King and Queen also known as Edna and Chad Resari. Edna Resari, originally from Wisconsin, has lived in Alaska for 45 years.  Her husband, Chad, is originally from Hawaii, but has lived in Alaska for 52 years.  They arrived from the carnival with a carload of consisting of them and the other Fur Rondy royalty and are visiting all the Fur Rondy Events.

Chad and Edna both have no interest in ever carving or judging the snow sculptures.  This was their second time visiting the event; they attended once before with their grandkids and find it interesting.  Their favorite sculpture was the snow machine sculpture.  “It has a lot of detail with all the trees, a lot of work done on it,” said Edna

Snow sculpting is an all around fun competition, that all of the artists enjoy participating in.  “When as a grown adult you get to go spend time and just play in the snow for a week,” said Pier.