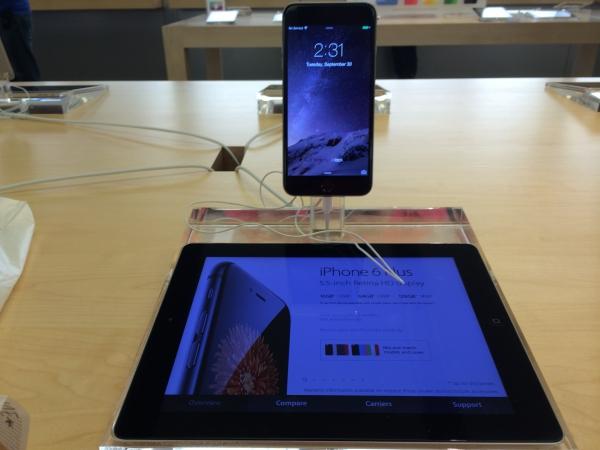 As you probably know both the iPhone 6 and the iPhone 6 plus have recently been released to the public. Apple sold 10 million phones worldwide in the first two weeks generating $249 million in revenue, which is a record for their company. But are the iPhone 6 and 6 plus really better than the previous generations?

By just looking at the newest model you can tell that the new iPhones are much larger. The new iPhone’s screen is 4.7 inches compared to the iPhone 5’s 4-inch screen. The iPhone 6 plus is even bigger with a 5.5-inch screen. Dione White, who is an Apple owner herself, she told me that when she first saw the 6th generation that she thought that “they are too big.”

Size isn’t the only thing that has been changed on the newest generation. The iPhone 6 and 6 plus have a new, thin design that is similarly shaped like a much thinner version of the iPhone 3. The phone has a better screen display, processor, camera, connection, call quality and a longer battery life. An owner of an iPhone 6, Stephany Lahn, takes lots of pictures using her phone. She says the camera is noticeably “a lot better [compared to her iPhone 4s].” The iPhone 6 plus is even slightly more improved than the iPhone 6, with better screen display, a bit longer battery life and the ability to use the phone in landscape mode by holding the phone horizontally. This landscape feature is unique to the iPhone 6 plus.

There are dozens of videos online of people bending the new iPhones, primarily the iPhone 6 plus. People have been making these videos and putting them online because consumers have been having issues with the iPhone 6 plus and occasionally the iPhone 6 as well, bending in peoples pockets. When I asked Jovel, an apple store employee, about the problems with the phones bending he told me that he hadn’t heard of the problem. How is this possible when YouTube channel, Unbox Therapy video has 54.5+ million views on this bend test alone? Jovel also told me that if those “big guys” tried bending the phone as hard as they could of course it would bend. Not only was the guy, Lou, bending the phone not particularly “a big guy,” but also this bending of the phone is happening in people’s pockets. Unbox Therapy also has videos of Lou bending other phones of different brands and even some phones with the same aluminum material. The other phones did not bend. Dione White says, “she would not buy it until they [Apple] fixes the problems with it bending.”

Lahn says, “sometimes its possessed, it presses buttons and scrolls by itself.” She said that the problem doesn’t occur often and she would still buy the phone with the problems she has with it.

The new iPhone 6 and the iPhone 6 plus have definitely raised the standard for the Apple iPhone.  With record-breaking sales around the world the newest generation will definitely be revolutionary to the technology industry.